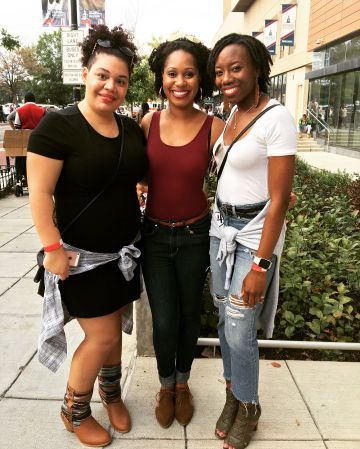 To put it into once sentence: there is nothing quite like homecoming at Howard.  This annual celebration brings students, friends, family and proud alumni together to the Mecca for a proud celebration that the school president has dubbed the “Black Coachella”.

As a VERY proud alum of the university that holds a special place in my heart, homecoming obviously means the world to me just as much as everyone else, however this year it meant something more.

The last year for me has been more than tough.  My chronic illnesses have retrogressed and progressed, to the point where I had to stop working and give up my beloved public health career.  After being denied treatments and disability benefits, I am now living off of food stamps and medicaid.  I have no income and can no longer afford my apartment, so in a month I will no longer have stable housing until further notice.  With other 30 symptoms daily, I now have complications or symptoms of my chronic illnesses that affect my hair, skin, eyes, mouth, sinuses, respiratory system, heart, nervous system, mouth, bones, GI tract, kidneys, gallbladder, liver, and muscles, just to name a few.  I have Sjogren’s Syndrome (an autoimmune disease), autonomic nervous system dysfunction (POTS), neuropathy which causes numbness, chronic paroxysmal hemicrania which causes severe migraine like headaches, arthritis in my hands, wrists, knees, ankles and feet, daily kidney stones/gravel, renal tubular acidosis, fainting, severe fatigue, and widespread inflammation.  I had to stop my last treatment because I was having severe reactions.  Current treatments are managing my symptoms or the progression of disease.  I am only 27.

Homecoming is bittersweet because marks my sick-anniversary.  It was days after homecoming my freshman year at Howard in 2008, when I got a cold which triggered the first symptoms of dysautonomia.  It was a cold that never went away.  The first time I went to HUH the ER doctor had told me I was probably sick because I was probably wearing no clothes at homecoming trying to look cute *insert eye roll*.  Multiple trips to HUH lead to diagnoses of lung problems and eventually issues with my heart.  Although I wouldn’t get diagnosed with dysautonomia until over two years later, I will NEVER forget when I first got sick.  I will never forget the journey I went through at Howard being sick, despite being sick and the support that I had received.

Since I am not working and have been virtually housebound lately, I spend much of my time in the house alone.  In three weeks leading up to homecoming, I had only left the house three time because my physical symptoms have been so severe.  Once was to go to the grocery store, once was to go to the doctor, and the other was to go to the ER because of kidney stones and gallstones.  I am in the midst of packing and trying to figure out where to live.  Much of my days are spent on pain killers, sleeping, or fighting with insurance companies.  I spend all my time talking about being sick, thinking about being sick, talking to doctors, talking to other sick people and actually being sick.  It’s exhausting and sometimes I just want to do something normal.

I had not planned on going to homecoming this year.  I have been too sick and honestly didn’t think I would physically survive attending the events.  Even so, with no income and not even having to money to have somewhere to live or pay bills, I definitely didn’t think I should be spending what little money I do have on something frivolous like homecoming.

It made me depressed.  Literally depressed.  Like sobbing, crying upset, didn’t want to do anything else depression.  See, homecoming is like a family reunion and this year just so happened to be my 5th year graduation reunion celebration.  Class of 2012 from near and far embarked on Howard’s campus to celebrate homecoming.  Which meant, my friends.  I would be missing spending time with the people that MADE my college experience.  I would be missing seeing my freshman year roommate who I haven’t seen in like three years.  I would be missing seeing the friends that I never get to see because we are spread out all over the country.   Being sick, I get the worst FOMO.  I see pictures on social media of everyone else my age going to parties, festivals, concerts, and even bars.  These are all things that I can’t do because of my current limitations and it makes me truly unhappy.  One night of going out leaves me in severe pain and recovering days or even a week and that’s if I can even make it through the entire night.  I knew homecoming should’ve been off the table.

However, I decided not to be sad.  I knew I needed to do something to make me happy because everything else in my life has gone to shit at the moment.  I can’t control anything else but I could control this.  With the way my symptoms and disease have been progressing, I may not have this chance again.  I may not have the chance to see these friends again.  I may not have the chance to feel this normal again.  So with the help of my fairy grandmother, my friends, a lot of drugs, a lot of make up, a lot of strength, a lot of determination, and A LOT of pretending, I went to homecoming last minute.  Despite feeling SUPER symptomatic the entire time, I didn’t let that ruin my fun or my chance at feeling normal.  I did all the things I wasn’t supposed to do like wear non flats, stand, walk, drink alcohol, not sleep enough, and I didn’t care.  I needed this.  I needed more than anyone knew.

With that being said, I feel like death and am definitely feeling the consequences.  I am writing this post bed bound, in severe pain, on more pain killers than you can image, nauseous, and can barely keep my eyes open.  It was completely worth it.

Howard University Homecoming 2017 wasn’t just a party for me.  It was a reunion, a reconnection, a celebration, an anniversary, my sanctity and my sanity.